Amazing Book! Chaser: Unlocking the Genius of the Dog Who Knows a Thousand Words 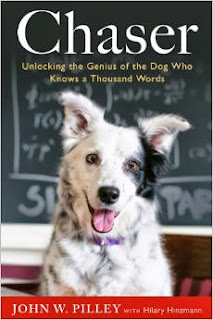 I'm going to give you the coon hound perspective on a soon-to-be released book, Chaser: Unlocking the Genius of the Dog Who Knows a Thousand Words by John W. Pilley. It is a book that made me think.

I hadn't really taken time to sit back and think about how I learn things... I just learn. And I don't think my owner thinks about how she teaches me things... she just tries to teach me things. Sometimes she confuses me by using two different words for one thing and being inconsistent with the treats. I don't think she's the greatest teacher but I know she loves me. So I was really glad to go away to the Doggie Country Club and have time to read this new book about a border collie who learned 1,000 words. In fact, it was so easy to read it took me only three evenings, alone in my cabin, to read it. And I LEARNED A LOT!

I have been with my owner since I was four years old, much older than Chaser, the border collie in the book, when she came to her family. She was just a cute puppy with soft fur. They had lots of time to teach her things. Another thing they had going for them was that Chaser's owner was a retired professor of psychology at Wofford College and he needed a post-retirement hobby. He had lots of time on his hands. Instead of traveling like my owner does and boarding Chaser, he made it his project to teach chaser words and behaviors from the get go. He knew how animals learned and he had worked with dogs before Chaser. He kept up with the research on animal behavior.

He had read about a dog that knew a measly 200 words. He decided that his dog, Chaser, would learn at least 1,000 words.He had a plan and Chaser was at the center of Pilley's big project. And know what? Chaser loved it. I wish I had all the attention Chaser got every day. Play was the way Pilley taught Chaser. Play and compliments as positive reinforcement were the way Chaser knew if she had done what her owner wanted her to do. Chaser couldn't get enough of it. She didn't like to be idle. She always wanted to play and learn. In fact, Pilley had to teach her words like "time out" so he could do a few things for himself like watch a TV show. Now, I "time out" all afternoon sometimes. Maybe this is why I don't know 1,000 words. Ya think?

In general, border collies are really smart. They are bred to herd and they are bred to listen to the farmer, or sheepherder. Pilley had a head start because border collies naturally attend to their owners and what their owners say. Now, I have heard that border collies are even considered to be the smartest dogs in the world. So here is this man with an eager to learn puppy and time on his hands. And, to top it off, he had the theoretical knowledge to do the best teaching job possible (notice those BIG words I just used?)

Chaser: Unlocking the Genius of the Dog Who Knows a Thousand Words takes you through this marvelous story of a relationship between a man and his dog and how that relationship, and good teaching practices, produced a very happy dog who also knew 1,000 words. These weren't just names of things. Chaser eventually learned words for 1,000 toys and could retrieve them when asked to. She could understand full sentences and learned new behaviors by imitating her owner. Oh yes, and she could overhear words and learn them that way too. Oh yes, and she eventually demonstrated deductive reasoning. This was supposed to be impossible for nonhuman animals." WOW!

I was amazed at what Chaser ended up doing, especially how she put words together. She could understand names for things, sure, but she could then understand what to do with them. She had hundreds of toys and could tell them all apart. ME? I ONLY HAVE FIVE TOYS! NO WONDER I DON'T KNOW MANY WORDS!

Now before you think Chaser was some sort of lab animal... she wasn't. She was a beloved member of a family. And, her owner made sure she also got to do what she was bred to do... herd sheep. She learned that too! NOW I DON'T GET ENOUGH CHANCES TO TRACK ANIMALS AND HAVE NEVER TREED A RACCOON! Chaser had it made.

I enjoyed Chaser: Unlocking the Genius of the Dog Who Knows a Thousand Words. I think dogs, dog owners and even psychology students would get a lot out of reading the book. And, with the holidays coming up, what a great gift idea!

I found out how dogs learn when I read Professor Pilley's book. I am glad my owner is reading it too. I am sure she'll have a few tricks up her sleeve to help me learn more words (BUT FIRST I NEED MORE TOYS!).

This book will be released on October 29, 2013 and will be available for sale on the publisher's site.

Note: As is common in the pet blogging industry, the writer was provided with a complimentary book for the purpose of review. It is a sponsored review through the BlogPaws Network.  While it has not influenced this review, the writer believes in full disclosure of all potential conflicts of interest.
Posted by Elizabeth R Rose at 6:39 AM