Here I am, Cinnamon, magically transported to the BEACH! It was another one of those "Cinnamon, get in the car" days when I didn't know where I was going. But I should have known... my long leash and food were loaded, then my owner's jackets and hiking boots were put in.

So after a very winding drive through golden fall scenery, we reached a very nice dog-friendly place, The Fireside. My friend Oakley recommended it. He knows all about the Oregon Coast. In fact, when we got to our room, Oakley had left a GIFT FOR ME! I was so excited. Now I have tons of treats... enough to last me all weekend. And, I love the cute toy that looks like Oakley. I am one lucky dog.

After calming down (I get excited about gifts) we went out the door and to the ocean trail which is just down the path. The waves were crashing and I wasn't a bit scared because I have been a "salty dog" ever since I enjoyed time in Haida Gwaii. I went right down to the rocks and sniffed around. I was looking for some crabs and dead fish.... cool stuff like they had in Haida Gwaii. But all I found was the remnants of a campfire where they must have been toasting marshmallows. Note to self: Check tide table.

So we spent quite a bit of time walking the coastal path. And, you know what? I found out the people here just love dogs. Many times I was stopped so people could pet me. The man in the picture below said that he and his wife were watching me from their balcony earlier and were thrilled to get to meet me and pet me when they took their walk. He scratched my back too! 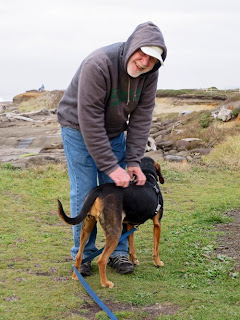 So it's now time to hit the sack (I have my travel bed here... not my real bed because it is still in Haida Gwaii).  I heard that there is a 10K  walk tomorrow. I'll bet we're going on it. I will be good and tired after that.

I love Yachats! I can't wait for tomorrow!
Posted by Elizabeth R Rose at 6:16 PM