I've Been Hacked: Francesca is suspended!

I was outside taking a sunbath and came back in to find the blog post below. I was appalled! I was embarrassed so say the least.

My apologies go out to my readers for teenage Francesca's ranting and poor choice of language. As of now, I've changed my password and put Francesca on suspension for one week. She will not be writing until she learns the benefits of proper editing. She can tell her story, eventually, but it will be done CORRRECTLY!

And as far as her slanderous comments about MY behavior, don't I look innocent?
Love, Cinnamon, Blog owner, editor and writer
Posted by Elizabeth R Rose at 2:11 PM 3 comments:

Hi it's me, Francesca. Cinnamon is out sunbathing so I came in to do some writing. Bwahaha! I am doing MY OWN WRITING! I want to tell you all about that middle aged goody goody, Cinnamon. She's a piece of work, I tell you!
First of all, she forces me to write in HER STYLE. I like to write with my own voice, as they called it in journalism school. Yeah, I went to college but dropped out to run the streets with my homies. When I write something, Cinnamon's all... "You have to re-write that and correct the grammar!" Screw her. No one wants to read her perfectly composed little blog posts! My friends are like... "Write something cool, Francesca... and we'll read the blog every day!"

Well, I thought I'd tell you how I ended up on a 40 ft. tie out leash in MY OWN BACKYARD! It's all Cinnamon's fault. This is what she did. So there was this squirrel in one of the trees that hang over my back fence. (Actually they are just rats with fuzzy tails) and Cinnamon starts howling like a country coon dog (which she isn't). I was new at the house so I figured that was what we were to do.... act like idiots when a we saw a squirrel. So that's what I did.

Cinnamon would start baying and I would start barking. So then she'd stop, knowing our owner would come out to quiet us down. But I didn't know that so I would keep barking and get in trouble. Meanwhile Cinnamon would just stand there and smirk. What an a_s!

So then it got worse. Cinnamon knew that I was a Treeing Walker Coonhound so she said... "Go get the squirrel, Francesca!" And I did. I looked up in the tree and then summoned my superdog bouncing powers and bounced myself over the 6 ft. back fence. Cinnamon howled and howled so, of course, our owner came out and got all upset.
I found my self in the neighbor's backyard. It was fully of peanut shells, but no squirrel. I got in trouble. I got leashed up and marched right back home.

The next week Cinnamon did it again. "Francesca... go get the squirrel, she said!" So, again, I got really bouncey and, you guessed it... over the fence! This time Cinnamon barked the alarm and then the wimpy little dog in the neighbor's yard started barking too. He sized me up and threated to call his gang members to get me. My owner came over and apologized to the neighbor with the wimpy gang dog and I was glad to go home. (The wimpy little dog was throwing gang signs)

So, since my owner is afraid to upset the neighbors, she went to Petco and bought me a 40 ft. lead for when I am loose in the yard. Of course she checks on me to make sure I don't get tangled up or anything but I've resigned myself to being a prisoner in my own yard while Cinnamon, the b_t_h, goes free. She's all... "you deserve it Francesca!"

So that's the truth. It's all Cinnamon's fault. She's not all sweet and nice like some people think.

Oh oh, here comes my owner! I'd better get off the computer...

Love, Cool Francesca, who tells it like it is! #realfrancesca #cooldogblogger

Email ThisBlogThis!Share to TwitterShare to FacebookShare to Pinterest
Labels: Francesca

We all know how important a grain-free diet is to us dogs. We all know that healthy is better. But I lean toward the foods that also taste good! This one sounded like a winner so I am asking Francesca to take over and do HER FIRST EVER FOOD ARTICLE!

This post is sponsored by Pinnacle and the BlogPaws Professional Pet Blogger Network. I, Francesca, am being compensated for helping create awareness about Pinnacle's Newly Formulated Grain Free Dog Food, but Coonhound Tales only shares information we feel is relevant to our readers. Pinnacle is not responsible for the content of this article. 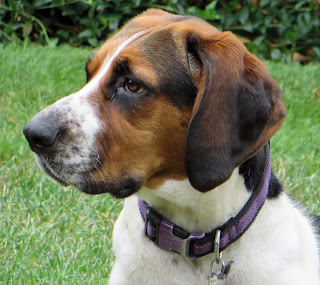 Hi, It’s me, Francesca. Food is always on my mind.  When I was in the shelter I learned about food. I learned that they would feed me on a regular schedule. But once I arrived to live with Cinnamon, I found out that only certain foods will keep me healthy.

I’m young now but I want to live to a ripe old age and keep chasing those squirrels and playing at the dog park.

Since I’m new around here, I just found out about Pinnacle®Holistic Pet Nutrition. They’ve been making holistic pet food since 1998, though, with some very healthy ingredients.  But now all their foods are GRAIN FREE! That means that Cinnamon and I will have an easy time of digesting the food. Sometimes our stomachs get sensitive (and our feelings too!).

Since May this year Pinnacle has made only grain free foods. Here’s all the other healthy goodies they put in and some things they do to make sure I will be a healthy coonhound:

I haven’t had the pleasure of trying Pinnacle yet but I sure am going to. It sounds good… especially the trout and sweet potato.

So how am I going to try it? And how can you? Well, here's where you can buy Pinnacle. And, here's a $5 off coupon to help you pay for your first item.

When I get my bag of food, I'll be letting you know what I think. So far, after doing ALL THIS RESEARCH, I know I'm going to like it. And, if I'm in the mood, I might even share some with Cinnamon.... maybe.

When I try out a new food I always mix my old food and my new food together for the first week or so. Remember, I have a sensitive stomach so a quick change might upset my cute little tummy.

So now I've made myself really hungry. It must be dinner time by now, isn't it?