Fireworks are NOT LEGAL in Vancouver, Washington on New Year's Eve 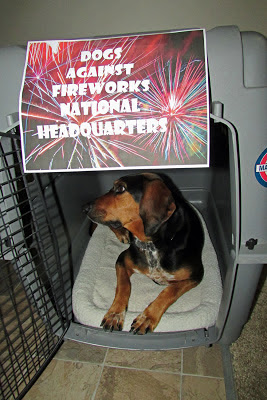 After I worked so hard on a fireworks ban for the City of Vancouver. And after I celebrated when the Mayor and City Council voted to approve the ban, I keep hearing that Fireworks are legal in Clark County. Well, I live in Clark County so that is so confusing.


Now I'm glad I live in Vancouver. In Vancouver you can't shoot off stuff on New Years Eve. It's against the law! So don't go shopping in Clark County and bring that horrible stuff into MY city. Why don't you stay inside and have a great little party?

Cinnamon the Coonhound
Executive Director
Dogs Against Fireworks
Posted by Elizabeth R Rose at 8:49 AM No comments:

A Special Note from Cinnamon and Francesca 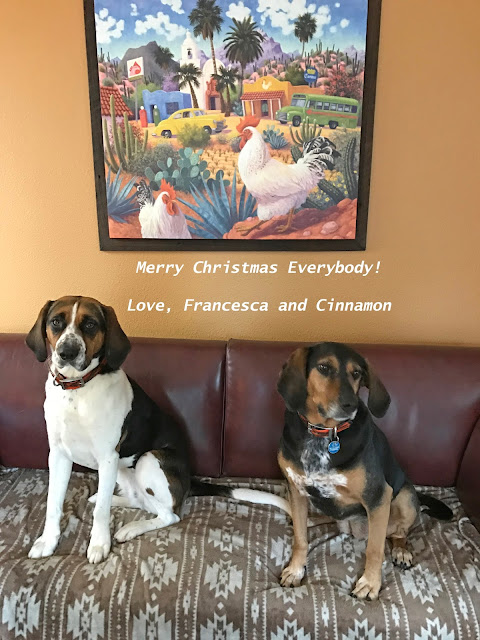 Posted by Elizabeth R Rose at 7:46 AM No comments:

Email ThisBlogThis!Share to TwitterShare to FacebookShare to Pinterest
Labels: christmas

Our owner finally returned from Los Cabos. That's way down in the tip of the Baja Peninsula where it's warm. Meanwhile Francesca and I were stuck in the snow at the Doggie Country Club. When she got back she told us all about Los Cabos and we realized that we missed a GREAT TRIP.

First of all, when she visited San Jose del Cabo she found out they have a really good humane society. So the street dogs can be adopted and cared for. The Los Cabos Humane Society cares for dogs from Cabo San Lucas and San Jose del Cabo. They offer accessible spay and neuter surgeries, adoption and foster care programs and promote the humane treatment of domestic animals

When my owner visited San Jose del Cabo she noticed there weren't many street dogs. Some that she saw actually had homes but were let out to laze around the Plaza. They looked healthy and well-fed. One of the hoteliers said she picked up a stray dog in a parking lot, took it to the humane society, left a donation and the dog would be helped on the road to good health and, hopefully, a new home. I was impressed. You probably know Francesca and I were both street dogs and were adopted from the shelter.

Now that we knew dogs had good lives there, our interest increased. While we didn't get any gifts from Los Cabos, we saw that the artists valued dogs and incorporated them in their art. We saw the photos our owner took during the Thursday night Art Walk in San Jose del Cabo.

The good thing about the historic district there is that there aren't too many cars. And, they cars go pretty slow through the narrow streets. It might be safe. And, there are parks and arroyos to hang out in. I could see myself trotting around checking everything out... and practicing my Spanish!


And then I found out they had beautiful beaches there with calm waves. On the beach you can run and play... as long as you don't chase the horses!

Now where to stay... well, my owner spent some time at the beautiful boutique hotel El Encanto which is full of gardens and nice flowers to smell. They allow dogs. Well, they have a long list of rules but I could obey them easily!
So then I thought I should find out about how to get to Mexico. The Mexican travel expert at About.com laid it all out in an article. Mexican regulations allow travelers to enter the country with up to two dogs or cats, but if traveling by air, airlines will only allow one pet per person. You have to bring the proper health paperwork and that has to include, of course, a Rabies Certificate.

I don't want to fly so we'd be driving ALL THE WAY. It's a long trip but if we could visit for the winter, it might be worth it. And, if we could stop a lot on the way. I just don't want to get stuck in the belly of an airplane.  Or, again, maybe we'll just send our owner!
Love, Cinnamon (Canela)
Posted by Elizabeth R Rose at 4:11 PM No comments:

Sometimes I think I’d like to be a snowbird type of dog. You know… head for the warm weather in the winter. I especially think about it when I get information about DOG EVENTS in the southwest.

Here’s a good one that came across my desk:

It’s time once again for Dog’s Day in the Garden at the renowned Desert Botanical Garden in Phoenix, Arizona. Take advantage of this special opportunity to bring the whole family, dogs included, to the Garden. Go for a walk on the trails, meet other dog lovers, and heel for photo opportunities. Learn about local dog-related nonprofits, shop and enjoy samples with your pup, and experience hands-on, canine-themed activities. Proceeds from canine admission fee benefit the Arizona Humane Society.

All dogs must be on a leash and remain on marked trails at all times. All dogs must be up-to-date on all vaccinations and registrations. Handlers are required to pick up after their dogs and properly dispose of their waste. Desert Botanical Garden reserves the right to refuse entry to or remove any dog thought to be dangerous to other dogs or visitors. Dogs will only be admitted to the Garden between the hours of 8 a.m. and 2 p.m. Programming is subject to change.